From shipbuilding industry to Science Park

The history of Lindholmen Science Park is a history of how the ailing Lindholmen area became the most dynamic and knowledge-intensive area of Gothenburg. A story of successive crises and how the wrong side of the river became right. 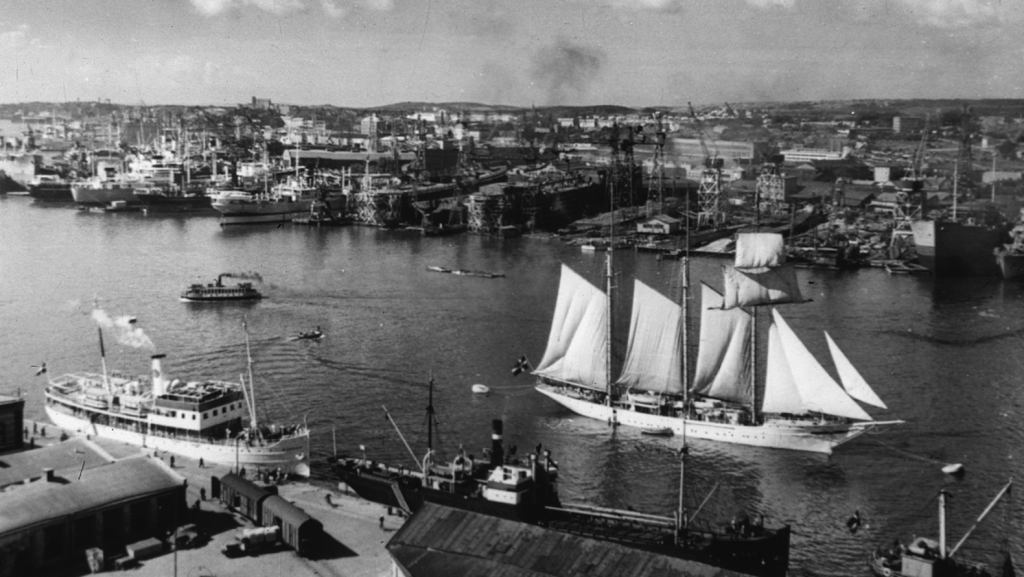 Do you want to know even more about Lindholmen´s history and future?

In the early 1980s, Gothenburg was experiencing one of its deepest crises ever. The crisis in the shipbuilding industry resulted in almost 20,000 redundancies, the shipyards were unoccupied and five kilometers of Norra Älvstranden was deserted.

The state-run Eriksbergs Förvaltnings AB, with Bengt Tengroth as CEO, led these efforts to find new ways to use the area and to integrate it into the rest of the city. One of the first measures was to convert the Lindholmen shipyard into a training center to reschool the city’s unemployed shipbuilders.

The City of Gothenburg took responsibility for Lindholmen in the early 1990s and placed six secondary schools in the area. In parallel, Chalmers University of Technology established an engineering program and some research at Lindholmen. The venture was called Kunskapscentrum Lindholmen.

There was now an embryo of a Science Park at Lindholmen, but the remaining land was still underdeveloped. Lindholmshamnen was simply a square kilometer of asphalt. Hisingen and the port areas had a very low status and the business community was not interested in investing here. A large part of central Gothenburg was unused, says Mats Karlsson.

In parallel with the investments in Lindholmen, residential construction began at Eriksberg. After a long period of planning, developments appeared to finally be taking off.

“Then the property and bank crisis hit Sweden, and construction was halted. After the crisis, the land and operations at Norra Älvstranden were sold to the City of Gothenburg for SEK 1. Our hope was that this would rekindle the development of the area,” explains Mats Karlsson.

Following the acquisition of Eriksbergs Förvaltnings AB, the city could gather together all of its operations and land at Norra Älvstranden into a single company, what became Älvstranden Utveckling AB. It was tasked with integrating Norra Älvstranden into the rest of the city and to build the new Lindholmen district. This was to be achieved without contributing additional public funds.

“How could we stimulate interest from the business community to invest in and develop Lindholmen? Even if the location was magnificent, it was still on the “wrong” side of the river. It was an enormous challenge,” says Mats Karlsson, who was then Chairman of the Board of Älvstranden Utveckling.

Chalmers University of Technology had been planning since the mid 1980s to set up a technology park to strengthen its collaboration with industry. In the late 1990s, Chalmers became a foundation university and its activities at Lindholmen became a subsidiary of Chalmers AB.

Alongside this dialogue between Älvstranden Utveckling and Chalmers, an enquiry was received from Ericsson. One of its subsidiaries was expanding and needed new premises. The subsidiary had 350 employees and anticipated rapid growth. Ericsson was interested in constructing an office building for 1,000 people at Lindholmen, but wanted help in creating a cluster of IT companies. A cluster comprising at least 10,000 people.

“The request from Ericsson was a very positive coincidence, as the two ideas could now support each other. The City, academia and the business sector were ready to invest. Suddenly, the conditions were in place for a real Science Park in Gothenburg,” explains Mats Karlsson.

Chalmers foundation and the City of Gothenburg took the initiative in forming the company that is now Lindholmen Science Park AB. Ericsson was invited to become a partner and a shareholder in the new company with the ambition that more companies would join as owners.

“It was not easy to create a cluster of 10,000 people. But we established an organization and took up the challenge,” says Mats Karlsson, who became Lindholmen Science Park’s first CEO.

A company for interaction

The new company contacted AB Volvo and Volvo Cars, which were both positive to the initiative to create a Science Park and became shareholders. Lindholmen Science Park’s Board of Directors now included weighty representatives from Ericsson, AB Volvo, Volvo Cars, Chalmers and the City of Gothenburg.

“The Board had a broad discussion about how we should develop operations and Lindholmen. This resulted in the decision to focus on three areas: mobile data communication, intelligent vehicles and transportation systems, and modern media and design.”

Another important decision was to separate property ownership from the organization that would focus on content.

“Many technology parks become purely property projects that are only interested in leasing premises. We already had a very good organization that could take care of property development. We also wanted an organization that could work to initiate joint research projects, encourage interaction and build the shared brand. This was the role for Lindholmen Science Park We can now see the results of the close collaboration that has taken place for many years between Älvstranden Utveckling and Lindholmen Science Park,” explains Mats Karlsson.

The strategy was clear and work could begin to attract more companies within the focus areas. But another crisis would now put a strain on the new collaboration.

In the early 2000s, the IT bubble burst and Ericsson and the entire IT sector plunged into a deep crisis. The new organization was shocked when one of the strongest players was suddenly facing a very uncertain future. Despite downscaling, the final result was still that more people now worked at Ericsson in Lindholmen than before the crisis.

“I believe the localization at Lindholmen was one important reason Ericsson remained in Gothenburg. Our Board became a forum for discussions about the crisis with other companies and with the City. The first time when the IT bubble burst, and later also during the crisis in the automotive industry in 2007–2008."

Despite the crisis, Lindholmen developed rapidly in the early 2000s. One year after setting up the organization, 2,000 people worked at IT consultancy companies.

The failure that became an investment

One of Lindholmen Science Park’s roles is to work to establish financing for research projects.  The first major initiative was an application to Sweden’s innovation agency, Vinnova.

“We applied for SEK 10 million to develop a concept for an open research environment, where industry, academia and the public sector could work together. Something we called Open Arena Lindholmen. Our owners were prepared to invest a corresponding amount of matching funds."

Despite this, Vinnova rejected the application. What initially appeared to be a major defeat, provided participants with a chance to find an alternative way to develop the idea.

“The rejection was a major disappointment and as CEO I pointed out that we had to lower the level of ambition. But the Board spoke out, they believed the idea was too good to abandon,” says Mats Karlsson.

Lindholmen Science Park was tasked with developing the concept without public funding. Instead, the owners provided some thirty people who spent almost one year developing and defining the concept’s ideas. This was a clear signal from the owners that they believed in the idea and had the courage to invest in collaboration.

“The Board of Directors has always played a key role in the development of the business and remains very important. Open Arena Lindholmen was created through the participation of stakeholders with strong support from Chalmers and the industry,” says Mats Karlsson.

Open Arena Lindholmen became a unique collaborative concept where Lindholmen Science Park assumed a role as project mediator by initiating projects, applying for research grants and by finding the right partner from academia, industry and the public sector. The concept formed the foundation of the programs and arenas that are now being run by Lindholmen Science Park.

A Science Park in an urban setting

At least 24,000 people work, study or live at Lindholmen today, and about 375 companies are based in the area. Even if we have achieved the original target to create a cluster of 10,000 people, stakeholders at Lindholmen Science Park are keen to continue developing the area.
An area that in the 1990s was deemed to be worth only SEK 1 is today Gothenburg’s most expansive district, with a strong focus on research, innovation, enterprise and education. This transformation would not have been possible without the willingness to invest and collaborate shown by the business sector, universities, the City of Gothenburg, Region Västra Götaland and by public authorities.

Read more about the area of Lindholmen Science Park today